Share on TwitterShare on FacebookShare on WhatsApp
As an author of several books, I know very well that people do judge a book by its cover. An attractive cover pulls the readers towards the book. Well, when I first saw the cover of The Magician, a by book by my friend Sonia Rao, I could not stop looking at it. It is gorgeous, isn’t it? And makes you want to know more about the book.
Well, if you want to know more about this beautiful book, then here are the details:

THE MAGICIAN
(The Tarot Trilogy Book 1)
by
Sonia Rao

Blurb
Fashion designer Sasha Kapoor always felt she’d missed out on love as she had an arranged marriage. And when her husband turns up at their 15th-anniversary party with a strange woman, she knows that her marriage is dying. With constant surprises and disasters to contend with, will Sasha ever get a chance at true love?

Shantha is much sought after for her tarot card readings on love, but can’t seem to help her own love life with a string of broken relationships behind her. Now, sparks are flying between her and a sexy bartender but will this relationship fizzle out too?

Young professionals Nilima and her husband are so besotted with each other, they give the word ‘soulmate’ a complex. Theirs is a match made in heaven…till tragedy strikes.

The Magician is a heart-warming story of these three dynamic women as they discover the meaning of true love through loss and longing. 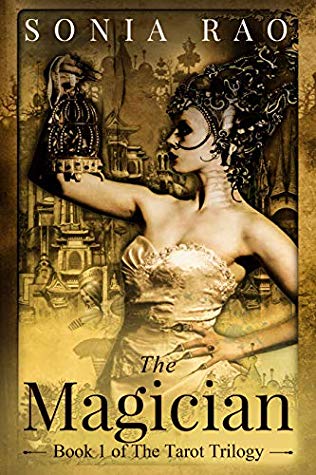 Thoughts from the Author, Sonia Rao
Who is a Magician? If it is a Tarot Card, then it the Major Arcana card in the deck and symbolizes life-changing issues.

But if it is a person, then it is Sasha, the main protagonist of my novel, The Magician. In this urban, contemporary romance, fashion designer Sasha, who caught within a loveless marriage, now seeks true love. It is also Shantha and Nilima who face their own challenges in love and try to rise above them.

It is also every woman. This is because, as Shantha says to Sasha in the book, “Imagination is your strength. You have the power to visualize and then manifest what you want. You are the Magician.” Each one of us is The Magician because we hold within ourselves the power to create the life of our dreams.

But how did this cover happen? There is a lovely story behind it. While researching the many tarot decks online, I saw this card on the Attic Shoppe website and I knew at once that this was my “Sasha.”

Go back and have a look at the cover again. Doesn’t it just grip you too? Part practical, part whimsical, part traditional, part digital, this card, like the book, is a labour of love.

The designer, Bethalynne Bajema, created this card for her Black Ibis Tarot card deck.  The love she put in is very evident in the vibe one gets from it. Every time I see it, I am inspired to bring a touch of magic to the everyday routines of mundane life.

Carrying on the serendipity, Bethalynne immediately and graciously agreed to my request to make this card my book cover. Such generosity is hard to come by and I believe it is the Universe’s way of saying “you’re right on track.” 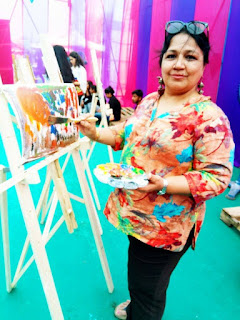 “Sonia Rao is a writer, editor, and award-winning blogger. Her fiction has appeared in many prestigious anthologies such as Voices Old & New and Jest Like That (edited by renowned editor-writer Shinie Anthony).

As NaNoWriMo’s Municipal Liaison for all-India and founder of the Wrimo India group on Facebook, Sonia has motivated thousands of people in India to write a novel every November since 2011. She has also curated and edited the first Wrimo India Anthology, Vengeance—A Sting In Every Tale.

Sonia likes to believe she is ‘high-minded’ but strangely, her fave hobby is thinking up torture devices for those autorickshawallahs who consider the roads to be their personal spittoon. Who knew?“

This Tour is Hosted by

We Promote So That You Can Write

This site uses Akismet to reduce spam. Learn how your comment data is processed.